By most measures, the U.S. Treasury yield curve is now inverted.  When any selected shorter term rate is higher than a selected longer term rate, the curve is “inverted”.  Most indicative in our work is the 2 year versus the 10 year, which is currently inverted by 0.51%.

Today is no exception as the Federal Reserve policy rate has increased by 3.0% since March.

What Does An Inverted Yield curve Mean?

An inverted yield curve, per se, does not necessarily indicate anything for the financial markets or the economy.  It does, however, indicate the trend of central bank policy relative to longer term expectations.

When the trend is persistently moving towards less accommodation (monetary policy tightening), the higher interest rates will eventually affect economic activity and financial markets.  Capital spending, hiring plans – essentially any business expansion – becomes more costly to finance and less likely to occur on the margin.  As rates increase, investors may be more attracted towards safe, short-term investments than stocks and other risk assets.

A frequently overlooked result of higher short-term rates is the level of liquidity in the financial markets.  Primary dealers in government securities finance most of their inventory of bonds with money borrowed in the short-term markets.  Higher financing costs result in lower inventories and less liquidity in the Treasury market.  Similarly, investors with leveraged portfolios (leveraged hedge funds for example) experience increased borrowing costs and may reduce exposure to risk assets.  Highly leveraged portfolios may be forced to reduce holdings, or into liquidation, to meet margin calls.

3.25% short term interest rates may seem benign (and they are, historically), but the speed of the increase can quickly impact markets.  A 300 basis point rise has occurred over just 5 months, and the impact to markets may not be fully realized at this point.

The Relationship Between Inverted Yield Curves And Recessions

Yield curve inversions have historically preceded a recession.  As indicated in the following chart, the 2-10 inversion has been a reliable indicator of economic recession.  The chart shows that the initial inversion usually occurs 8-20 months before the recession arrives (officially). Today, we are just 3 months into the recent inversion.

The difference today is that the economy is already in a slow growth mode, if not declining over the last 9 months.  We will not open the “recession debate” here, but our recent economic commentary outlines many of the components of the economic landscape that are unique in today’s economy. 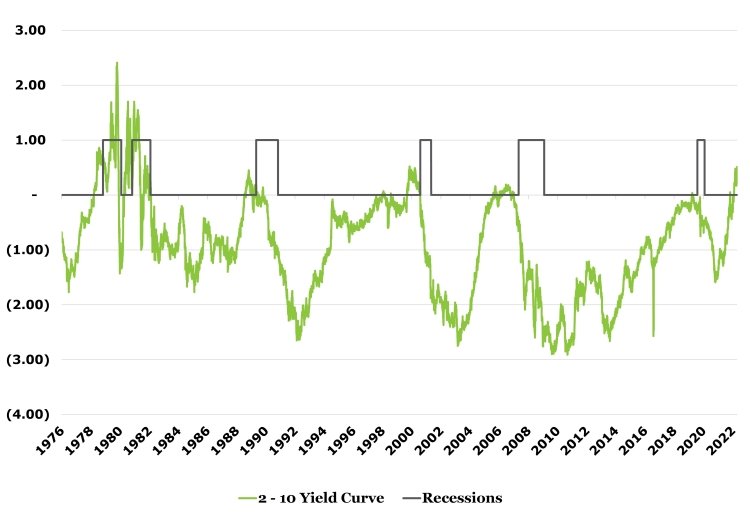 How is Advanced Asset Management Advisors Reacting To The Inverted Yield Curve?

Advanced Asset Management Advisors’ portfolio strategies have been prepared for higher interest rates and a slowing economy since rising inflation became a distinct expectation nearly two years ago (see our overview of inflation here and a more recent update on interest rates here).

Our equity portfolios are generally focused in large cap companies, making sure that more defensive sectors are represented – Healthcare remains a standout.

Our fixed income portfolios remain positioned in short-term and high-quality debt instruments to reduce the risk to principal that occurs in a rising rate environment.

If you’re interested in learning more about our portfolios and where you can access them, send us a message here.  We’d be happy to speak with you.

The yield curve is not a stand-alone omniscient indicator.  The trend of central bank policy is most important.  With few exceptions, central banks around the world are in a tightening policy mode with clear indications of a slowing global economy.  After 14 years of monetary ease, it will not be easy to engineer a perfect “soft landing” for the economy – an objective we have likened to landing a Boeing 767 on an aircraft carrier.

Where will the market go in a quarter, or a year? We can’t say – and neither can anyone else. We all know that timing the market is a fool’s errand and that no one can predict the future reliably. As such, we will remain rooted in the black and white statistics of market pricing and sector valuation, sharing our perspectives as we go.

The information and opinions in this report have been prepared by the investment staff of Advanced Asset Management Advisors (AAMA). This report is based upon information available to the public. The information herein is believed to be reliable and has been obtained from sources believed to be reliable, but AAMA makes no representation as to the accuracy or completeness of such information. Opinions, estimates and projections in this report constitute AAMA’s judgment and are subject to change without notice. This report is provided for informational purposes only. It is not to be construed as a recommendation to buy or sell or a solicitation of an offer to buy or sell any financial instruments or to participate in any particular trading strategy in any jurisdiction in which such an offer or solicitation would violate applicable laws or regulations.

Stay Up to Date

Want to stay up to date with fundamentally-driven market insight, economic analysis, and practice management advice?